10. Illustration and other visual-aesthetic milestones

This section aims to contribute to the knowledge of some of the most relevant illustration and design that Ulmeiro has commissioned, as well as highlighting certain milestones in its path as a cultural promoter with a broader project, beyond the mere publishing, distribution and sale of books.
In this sense, and with the conditioning of the materials that were possible to gather in due time, it appears important to emphasise the contribution of the artists Vasco, in political caricature, of the illustrator António Pimentel, in the visual conception of the iconic collection Imagem do corpo [Image of the Body]. Due to its consensual value in the illustration, it is also worth mentioning the existence of precious illustrations by João Abel Manta and Mário Botas in the Ulmeiro catalogue.
It is also important to underline the relevance of the publication of the collective book Poemografias [Poemographies], not only for the book itself but also for being a theoretical and aesthetic reflection on a type of poetry more directly linked to visuality, precisely the visual/ experimental poetry. Of this aesthetic current stood out José-Alberto Marques and Alberto Pimenta, whose collaboration with Ulmeiro will extend to the edition of a book of poems by each (respectively, Nuvens, no vale, 1985, and Metamorfoses do vídeo, 1986).
Finally, it is emphasised the contribution of a wide range of women illustrators who have contributed to give visibility to the works of many Portuguese (and not only) women writers, new or meriting greater projection, in an assumed complicity. We talk about artists like Ana Leão (responsible for the covers of Montedemo and Estátua de sal, books of 1983, respectively by Hélia Correia and Ondina Braga), Carmen (Isabel, Isabel, Isabel, by Noémia Seixas, 1983, Dinâmica subtil, by António Ramos Rosa, 1984, and Nuvens, no vale, by José-Alberto Marques, 1985), Cristina Reis (Ah Q, by Bernard Chartreux and Jean Jourdheuil, and Fanshen, adapted by David Hare, both from 1976, and Bicho de sede, by Manuel Cintra, 1986), Graça Martins (Restos de Infantas, by Isabel de Sá, 1984), Lídia Martinez (Cartas de Pedro e Inez, by herself, and As cartas de Yage, by Burroughs and Ginsberg, both from 1994) and Wanda Ramos (a drawing on the cover of As incontáveis vésperas, 1984, authored by herself).

Video documenting section extra (now no 10) of the physical exhibition, open to the public in 2019. 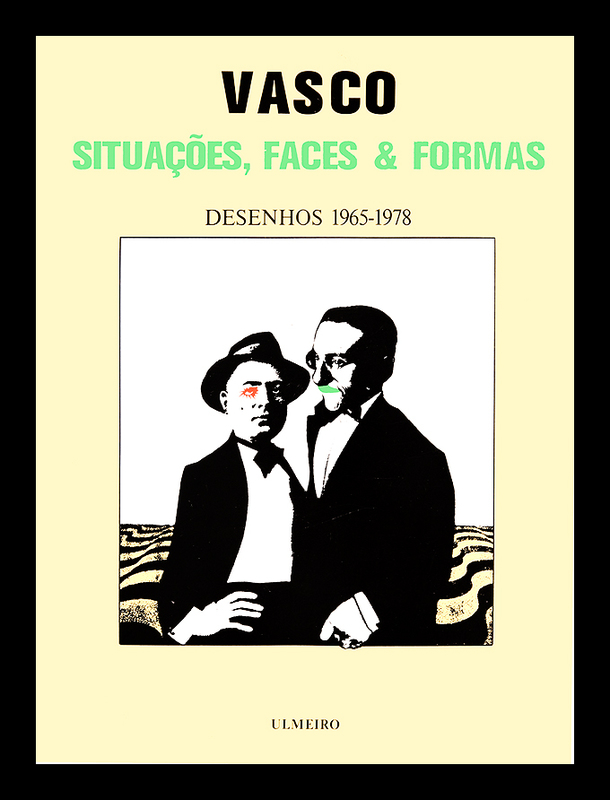 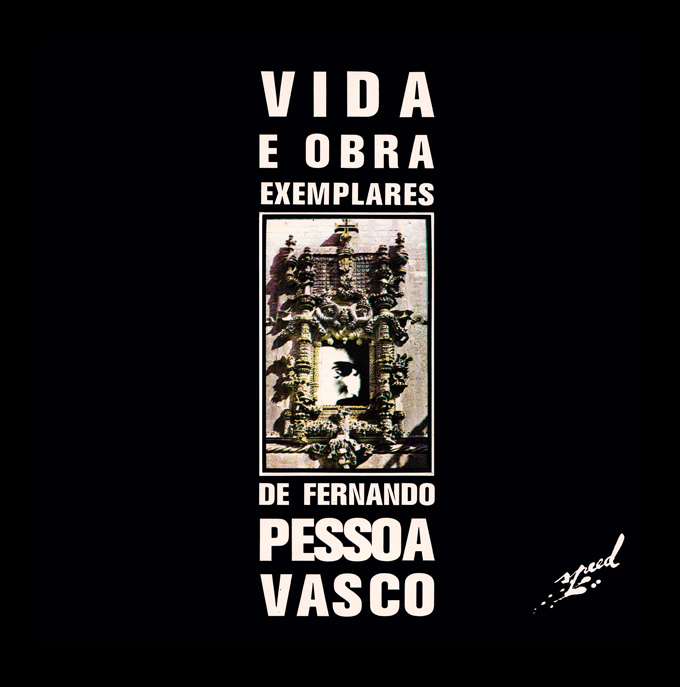 Two photos of a launch session of a book by Vasco de Castro (s.a., no place, undated) [Esp. JAR].

The cartoonist Vasco de Castro linked himself with Ulmeiro in the 1970s-90s through two important works. The first was Situações, faces & formas. Desenhos 1965-1978 [Situations, faces & shapes. Drawings 1965-1978], in which he reviewed his work as a draughtsman in exile and during the revolutionary phase and signified a turn towards a more expressionist approach. It had a 1st edition in 4/1978 by Cultarte Editora, a publisher from the universe of Ulmeiro, with a print run of 2500 copies. A 2nd edition was produced by Ulmeiro in the 1990s. The second book by Vasco was Vida e obra exemplares de Fernando Pessoa [Exemplary life and work of Fernando Pessoa], a catalogue of the homonymous exhibition, published by JAR but with Ulmeiro's logo, in a print-run of 4200 copies. There were also occasional collaborations, such as a caricature of Pessoa that appeared in an Ulmeiro journal in 1985 (see below). 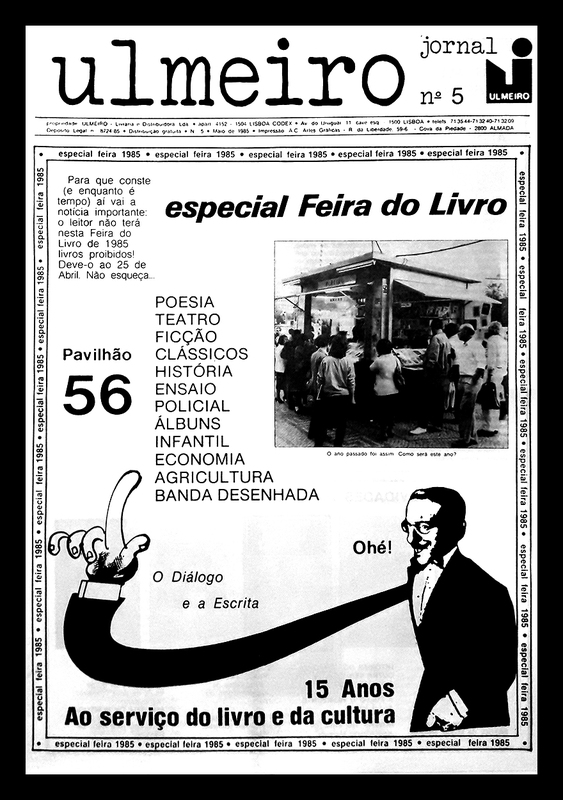 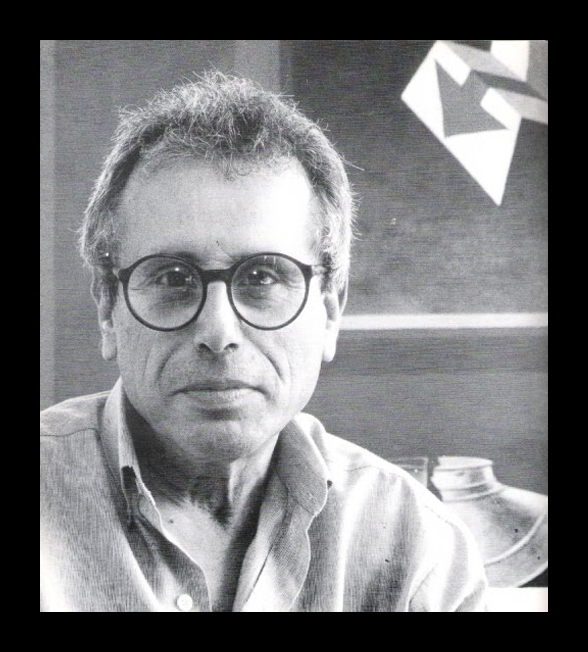 Born in 1935, in Condeixa-a-Nova, António Pimentel had as masters Carlos Ramos (painting) and Mário Oliveira Soares (ceramics). In 1956 he participated in the 1.º Salão de Artes Plásticas dos Novos de Coimbra [1st Saloon of Visual Arts of the Coimbra New Ones], signing his first works as Tòpi. The following year he held there his 1st individual exhibition, in the gallery of O Primeiro de Janeiro, introduced by Manuel Deniz Jacinto. He then co-founded the Círculo de Artes Plásticas [Visual Arts Circle] (in the Associação Académica de Coimbra [Academic Association of Coimbra]), which would be directed by the Brazilian modernist painter Waldemar da Costa. Among other works, he executed at that time a series of woodcuts for the university film club. In 1959, he painted the murals of the Instituto Maternal de Coimbra [Maternal Institute of Coimbra], at the invitation of Bissaya Barreto. In Lisbon, to where he moved in 1960, he worked in cinema and advertising, at ETP, with Alves Redol, Ary dos Santos, Câmara Leme, Cipriano Dourado, Luís Sttau Monteiro and Orlando da Costa. He then exhibited in important galleries, did the cover for the 1st José Afonso LP, Baladas e canções [Ballads and Songs] (1964) and became a member of the Gravura cooperative. Soon afterwards, and until 1974, he self-exiled in Rio de Janeiro, Paris and London, where he exhibited several works, particularly engravings. He returned to Portugal with the Carnation Revolution, having taken up advertising again, at Espiral, with Ary dos Santos. In parallel, he started a prolific career as an illustrator for some authors (Ary dos Santos, Lília da Fonseca and Soledade Martinho Costa), for the humorous weekly publication O Bisnau (in 1983/4, directed by Afonso Praça and with Tóssan at his side) and for publishers (Rolim, Ulmeiro, Vega, etc.), besides commissions for the State, especially paintings for the TLP and CTT commemorative stamps. Between 1984 and 1986 António Pimentel developed a prolix and quality work in Ulmeiro, having therefore become one of the main illustrators of this publishing house. Beside is featured a sample of this production, which mainly concerned the collection Imagem do Corpo [Image of the Body], giving it a strong visual identity. From 1985 onwards he concentrated on his passion, painting, setting up a studio in Alcabideque. His last exhibitions date from 1997, at the Coimbra Cultural House and at the Municipal Museum Dr. Santos Rocha (Figueira da Foz). He died on 24/IV/1998.

Poemografias has become a reference work for experimental poetry, containing works by Abílio, Alberto Pimenta, Ana Hatherly, Antero de Alda, António Aragão, António Barros, E. M. de Mello e Castro, Egídio Álvaro, Fernando Aguiar, Jorge Lima Barreto (Telectu), José-Alberto Marques, Salette Tavares and Silvestre Pestana. This relevance was recently highlighted by one of its organisers, Fernando Aguiar: “The book «POEMOGRAFIAS», despite being more than 20 years old is, yet still, the most recent collective publication of Portuguese experimental poets. After that book I organized some anthologies of Portuguese visual poetry, but only with poems, while «POEMOGRAFIAS» has a theoretical perspective of each poet, besides the visual poems” (transcription of an excerpt from an interview to Jorge Luiz Antonio in Contrapontos, vol. 10, no. 3, 2010, p. 358)

Cover and pages 24 and 25 of no. 3 of the magazine Sobreviver [To Survive], 2nd series, including photos of participants and performances at the exhibition «Poesia Experimental Portuguesa» [«Portuguese Experimental Poetry»] (Coimbra, CAPC Gallery - Círculo de Artes Plásticas de Coimbra / Coimbra Visual Arts Circle, 1985) and in the launching of the book Poemografias [Poemgraphies], organized by Fernando Aguiar and Silvestre Pestana (Lisbon, 1986). 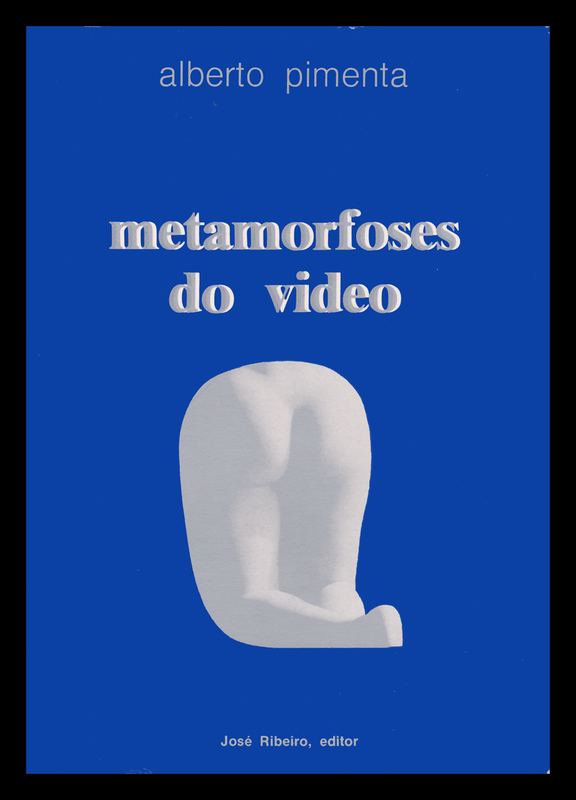 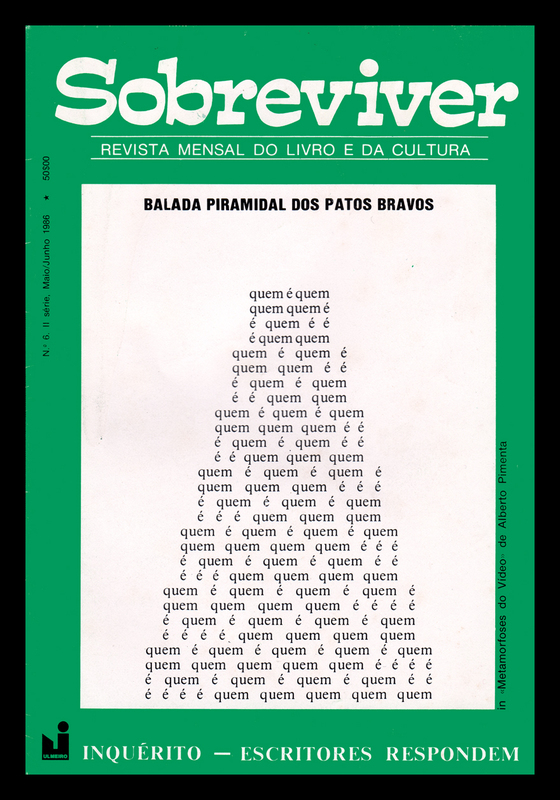 Cover of the no. 6 of the magazine Sobreviver, 2nd series, 5-6/1986, with the visual poem “Balada piramidal dos patos bravos” ["Pyramidal ballad of wild ducks"], by Alberto Pimenta [DCA DM].

Alberto Pimenta was one of the poets linked to experimental poetry who continued to collaborate with Ulmeiro, which published in that same year of 1986 a book by him, Metamorfoses do video [Metamorphoses of video], whose public launch was complemented by a new artistic performance.

The illustrations by João Abel Manta for this anti-nuclear manifesto which Ulmeiro disseminated are an unusual work in the framework of the author's production at that time, but maintaining the quality that established him as one of the greatest Portuguese cartoonists of all time. Although based on the same illustration, they have a different message: one accentuates the environmental combat dimension, the other centres on the fight against the United States of America imperialism, a country then denounced by many environmentalists as the main promoter of nuclear energy, but Manta's allusion has a broader mark, evoking other past activism, such as that against the Vietnam war.

The feminine affirmation in the democratic Portugal was not only seen in literary creation but also in the artistic one. In line with this impetus, Ulmeiro gave visibility to the work of a significant body of new female artists through their illustrations and graphic arrangements for many of the publisher's books. Above are only shown 3 covers by women illustrators as several others have been presented in various sections of this exhibition, especially in section 7. The artisanal character of Ulmeiro – evident in its attachment to the bookseller-publisher workman-craftsman profile, in the modest business structure with an associative tendency, in the graphic arrangements irregularity, in relatively limited print-runs, in the existence of many unconsolidated collections, etc. – will have limited its resilience capacity, resulting in less business robustness in situations of strong competition and/or market deregulation.

See next issue: Maps of Ulmeiro's distribution network in mainland Portugal and Lisbon in 1970 >>