3. The final fight against the dictatorship

Ulmeiro was one of the main distributors of new alternative and resistance publishers such as Afrontamento, Centelha/ Fora do Texto, Escorpião, etc. For that reason, the distributor-bookshop was one of the most targeted by political police seizures, having been the victim of more than 40 raids, at an average of more than one per month.
It distributed the cultural-civic intervention newspaper Crítica [Criticism] (1971/2, 9 ns.), created by young university students like Eduarda Dionísio, Luís Miguel Cintra and Jorge Silva Melo (these two will be at the genesis of the Teatro [Theatre] Ulmeiro collection).
In 1972, José Ribeiro joined João Carlos Alvim and Assírio Bacelar to create Assírio & Alvim, which in the beginning managed to elude the political persecution that already afflicted Ulmeiro and the like. That is why they transfer to it the Cadernos Peninsulares [Peninsular Notebooks] collection (renamed Peninsulares [Peninsulars]), together with all the distributions of Ulmeiro. They were accompanied by Dorindo de Carvalho and Manuel Rosa in the graphic arrangement and covers, Mário Reis in the administration and Carlos Caeiro as "invisible capitalist shareholder". There they release works such as the insurgent Wanya comic book and the Antologia da poesia concreta em Portugal [Anthology of the concrete poetry in Portugal], both in 1973, and many political books, with a Marxist and radical left perspective. One of them, Portugal sem Salazar [Portugal without Salazar], will give rise to outcry and further political retaliation.
It is at this stage that the civic tertulias (gatherings) appear, animated by composers like Carlos Paredes, singer-songwriters like José Afonso and Francisco Fanhais, and by intellectuals like Luiz Pacheco and Natália Correia.

Video documenting section 3 of the physical exhibition, open to the public in 2019. 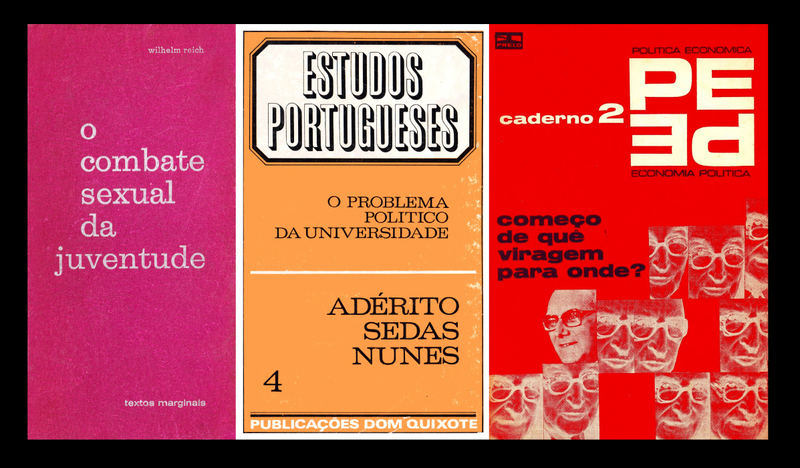 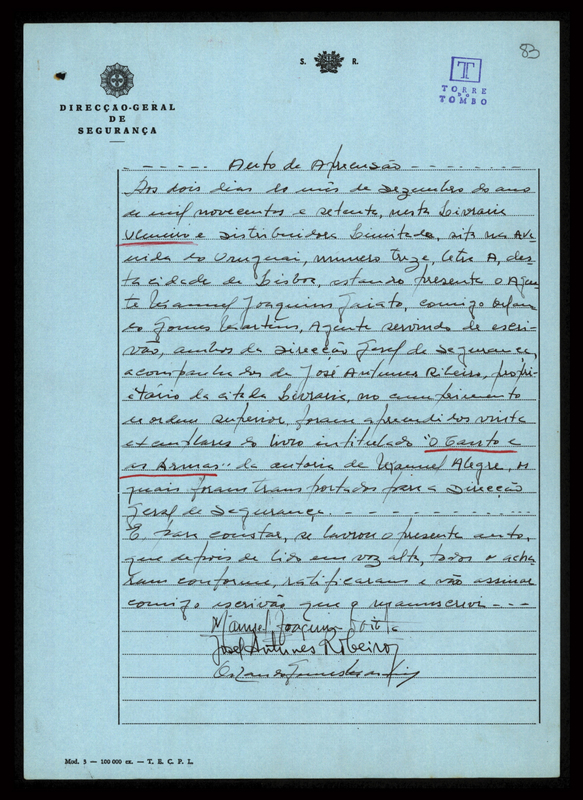 PIDE’s apprehension notice of the book O canto e armas [The Singing and the Weapons], by Manuel Alegre, at Ulmeiro bookstore, on 2/12/1970 [DGLAB / PIDE/DGS Archive - “Document provided by ANTT. Quota: Pide, SC, CI (1) 2224, NT 1242, folder two”].
The book publishing and distribution by alternative Portuguese publishers was a relevant step in the conscientization and radicalization of many citizens and groups, and for that Ulmeiro was pivotal. Among the works that circulated more or less clandestinely were titles by Afrontamento, D. Quixote, Prelo and of the Textos marginais [Marginal texts] collection, among others. In an attempt to escape censorship, books were published based on articles in the press, often without success, as in the case of As histórias dramáticas da emigração [The Dramatic Stories of Migration], banned from circulation on 25/4/1970. One of the most iconic books of that time was O canto e as armas, of whose 2nd edition (by Centelha) 20 copies were seized at the Ulmeiro bookstore at the end of 1970. 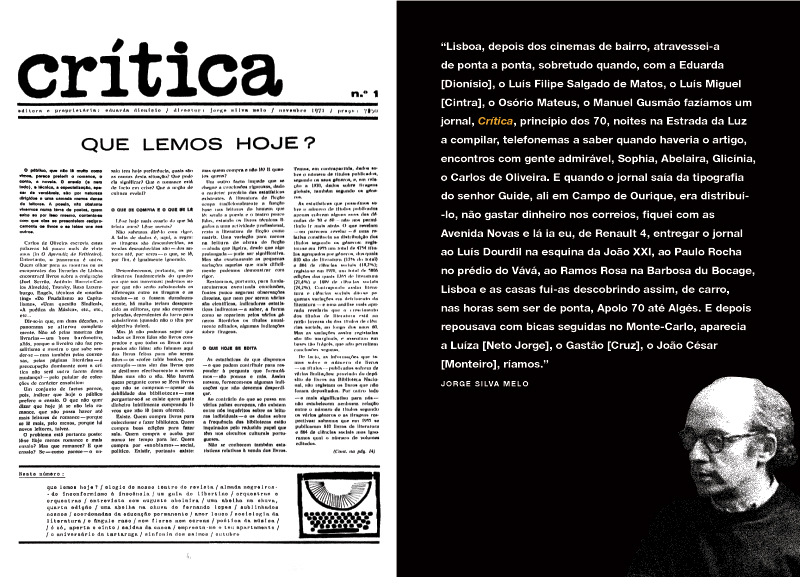 Cover of no. 1 of the newspaper Crítica [Criticism] (Lisbon, 11/1971, distr. by Ulmeiro) and photo of Jorge Silva Melo, with attached transcript of an excerpt from his article “Vida a andar por aí - Autobiografia de Jorge Silva Melo” [Life to walk around - Autobiography by Jorge Silva Melo], JL, 10/2/2016 [BNP].
Spokesperson for the new university generation of the 70s, Crítica was an ephemeral periodical (9 ns. in 1971-72) yet critically debated relevant cultural issues. It was distributed by Ulmeiro and friends, often late at night, as revealed by its director Jorge Silva Melo in a recent statement to JL. 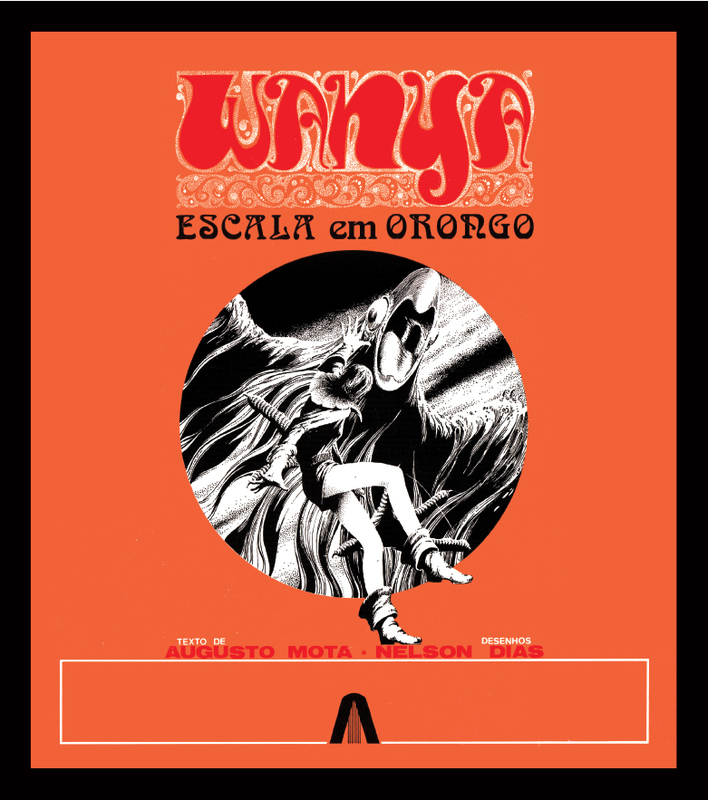 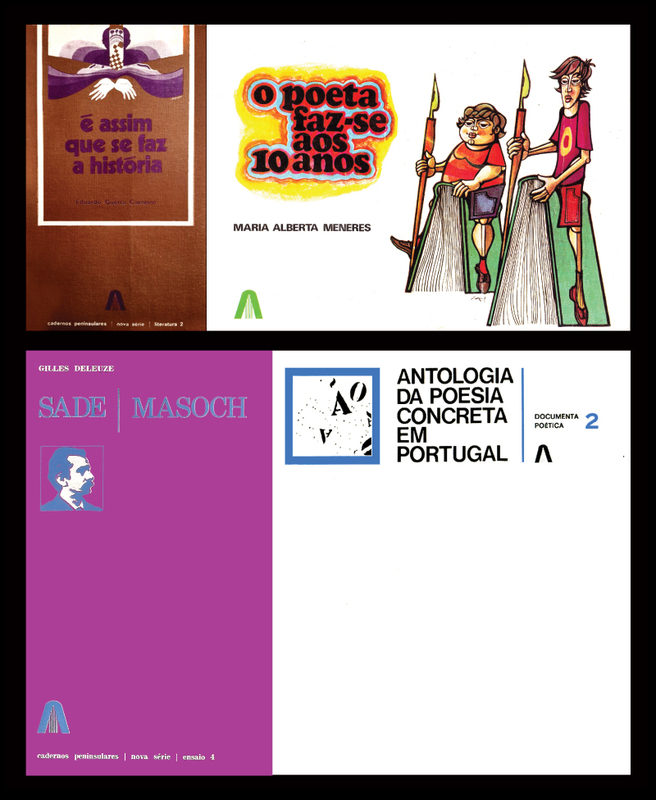 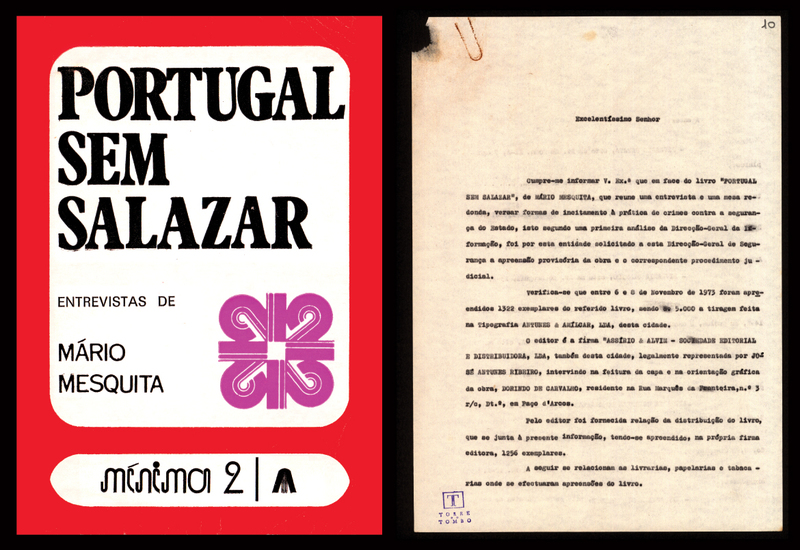 Portugal sem Salazar was one of the books from the new Assírio & Alvim that had the most uproar during the Marcelism (Marcelo Caetano's time as head of government). Constituted by testimonies from exiled members of the Geneva group (Manuel de Lucena, António Barreto, Eurico de Figueiredo, Medeiros Ferreira, Valentim Alexandre) collected by journalist Mário Mesquita, it led to the detention for questioning of the compiler, editor and cover artist (Dorindo de Carvalho), for the book “openly advocating socialism” and “forms of instigation to violence, seen from a political and even revolutionary perspective” (quote from interrogation from the PIDE / DGS (Polícia Internacional e de Defesa do Estado / International and State Defence Police)). Of the around 5,000 copies, the political police seized 1,322 copies in raids in the publisher and the circuit of bookshops, kiosks and the like, and in the Ulmeiro bookshop it only managed to confiscate one copy. The rest had already vanished through clandestine channels. As a defence, both editor and compiler requested that texts from the weekly newspaper Expresso be appended, which contained complimentary commentaries of some of these interviews, including from the former Liberal Wing parliamentarian Francisco Sá Carneiro, which would denote an incomprehensible contradiction. By this time, the political police had already registered José Antunes Ribeiro as the “mentor” of this “firm” and the latter as “publisher and distributor of several books of a very dubious nature”.

See next section:  4. The Ongoing Revolutionary Process (PREC), its derivatives and the post-revolution  >>