Ulmeiro - Livraria e Distribuidora, Lda. [Ulmeiro - Bookshop and Book distributor, Ltd.] emerged in 1969 to strengthen the resistance to the dictatorship, joining the movement of cultural cooperatives and other opposition networks such as the Comissão Democrática Eleitoral (CDE) [Democratic Electoral Commission]. It was envisioned by the young but already experienced José Antunes Ribeiro, formerly an editor at ITAU, a bookseller at Obelisco (Amadora) and a collaborator of the influential magazine O Tempo e o Modo [The Time and the Mode], and also co-founder of the VIS cooperative that same year, also in Amadora. Ulmeiro would be the guarantor of Devir and had close links with cooperatives like Livrelco, Sextante, Esteiros and Pragma, being the distributor of some of them during the Marcelism time.
Ulmeiro extended its activities to publishing as early as January 1970, with Isto anda tudo ligado [This is all connected], by Eduardo Guerra Carneiro, who inaugurated the iconic Cadernos Peninsulares [Peninsular Notebooks] collection. It was followed by A poesia deve ser feita por todos [Poetry should be done by everyone], by Carlos Loures, and Causas da decadência dos povos peninsulares [Causes for the decadence of the Peninsular peoples], by Antero de Quental, promoting an intervening and troublesome perspective. At the 4th title the political police retaliated with a heavy hand, seizing almost all of the 2,000 copies of Histórias do cárcere: contos [Prison stories: tales], by Juan Gómez Casas. During this raid were also seized c. 200 copies of the clandestine edition of Duas peças em um acto [Two plays in one act], published by Paisagem in solidarity with the author Luís de Sttau Monteiro and the publisher Edições Minotauro, both persecuted by the political police due to the original edition of this anti-Colonial War book. In 1971 it published O teatro, a crítica e a sociedade [The theatre, the criticism and the society] essay, by Argentinean Adolfo Gutkin, without the play this author had tried to stage in Portugal, «Melim 4», as it was banned by the political censorship.
Another then neuralgic connexion of Ulmeiro was the fight of students and of revolutionary guerrillas. The distribution gave priority to works of this kind and African independentist students of a residential university community in Benfica were given an open account at Ulmeiro. It was a question of spreading the internationalist ideology as far as possible, since it gave meaning to political and cultural intervention. The liberation from colonialism was indispensable to overthrow the dictatorship.
This initial activity also included the presentation at Ulmeiro Gallery (and publishing) of a series of engravings and drawings by Rogério Petinga, António Ferra and Aurélia Rosa da Silva, in 1970-71.
______________________________
*In the initial Ulmeiro were also present Maria Aurélia and Victor Nicolau (the other co-founders, replaced by António Antunes Ribeiro, brother of José Ribeiro), who were joined by Carlos Garcia and Natércia Oliveira in the 1980s, and Maria Helena Ribeiro and Lúcia Ribeiro (sister and wife of José Ribeiro, respectively) in the bookshop, renamed Livrarte.

Video documenting section 1 of the physical exhibition, open to the public in 2019. 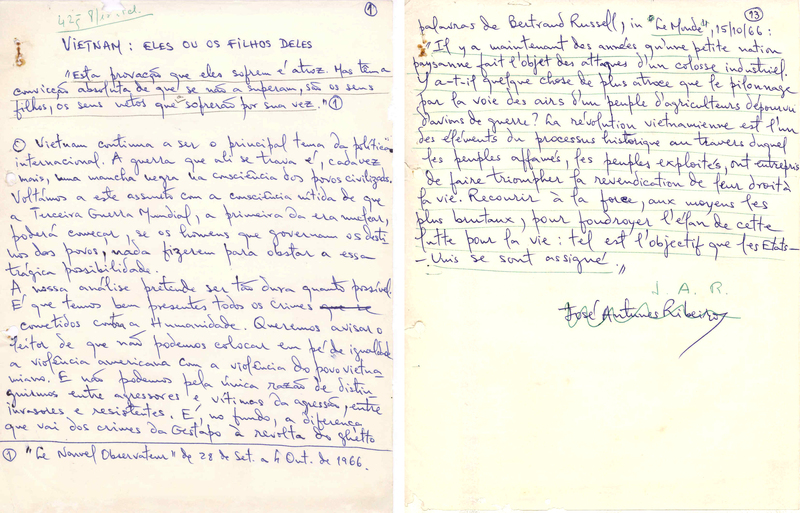 Opening and conclusion of the manuscript "Vietnam: eles ou os filhos deles" [Vietnam: them or their children], by José Antunes Ribeiro, c.1966, fls. 1 and 13 of 13 typed folios [FMS/ Fundo DBE - Documentos João Bénard da Costa, folder 06772.005]. A critical text on the Vietnam war which was intended for O Tempo e o Modo [The Time and the Mode] magazine, connected to progressive Catholics, but which was never published, probably due to the intervention of the censorship. 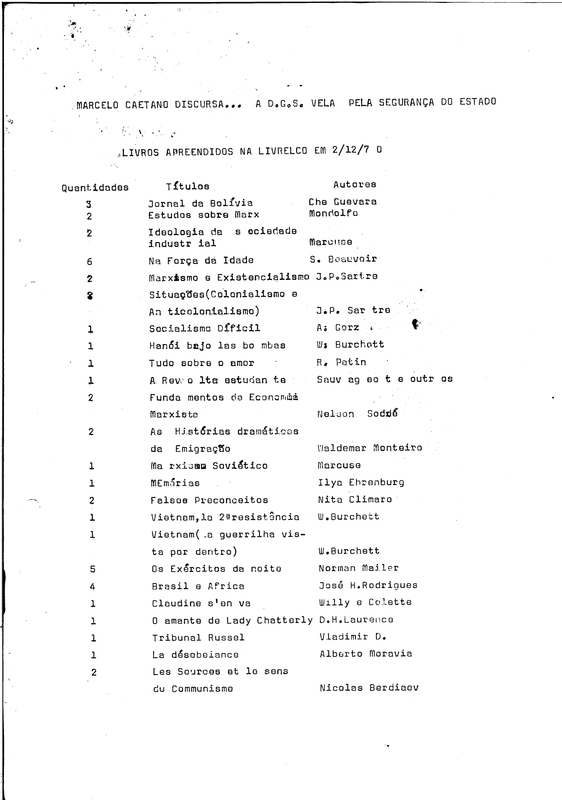 Communiqué “Marcelo Caetano discursa… A D.G.S. vela pela segurança do Estado. Livros apreendidos na Livrelco em 2/12/70” [Marcelo Caetano speaks… D.G.S. watches over state security. Books seized at Livrelco on 12/2/70], by Livrelco, c.12/1970, 2 typed folios [FMS/ Fundo AMS - Arquivo Mário Soares, folder 02269.005.007]. It was by this means that Livrelco, a cooperative supported by Ulmeiro, released a list of its books seized by the political police, also reporting the loss of 4367$40 (in Portuguese currency), a large sum for the time. 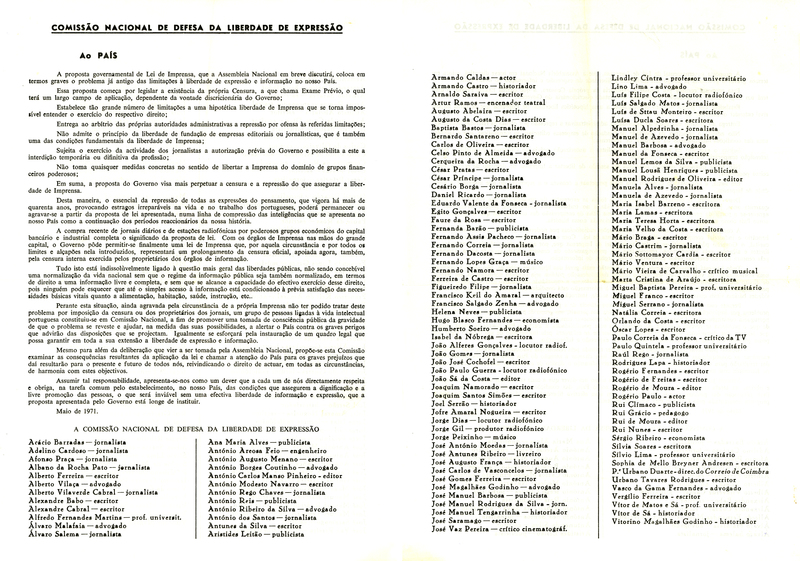 Petition «Ao País» [To the country], of the Comissão Nacional de Defesa da Liberdade de Expressão [National Commission for the Defense of Freedom of Expression], 5/1971, 1 fl., front and reverse [Loures Municipal Archive - António Carlos Costa Cerqueira Fund]. This was one of several manifestos by the opposition calling for freedom of expression in the country. Its opportunity was due to the elaboration of a new press law under Marcelism, which maintained an iron censorship of the printed press, contrary to what was then made to be believed. On behalf of Ulmeiro, José Ribeiro appears as the only representative of booksellers, alongside several publishers of the resistance and many writers and journalists. 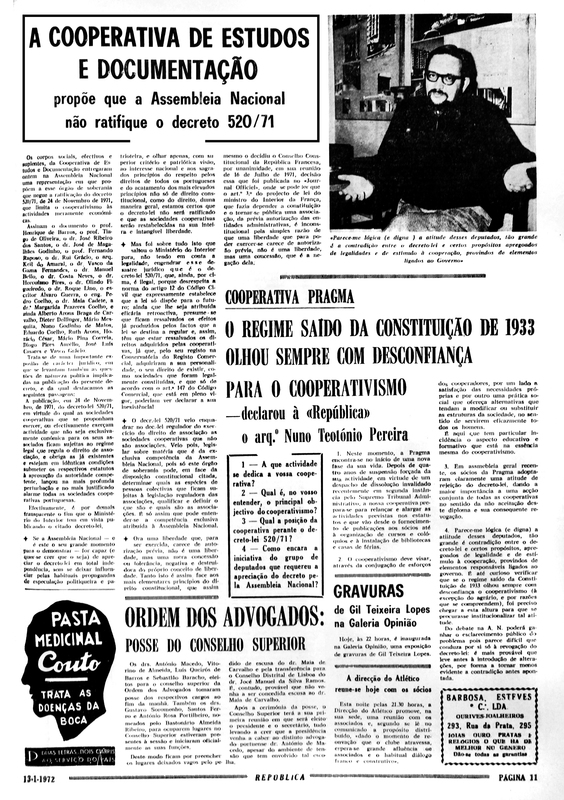 Page 11 of the newspaper República, 15/1/1972, containing the articles “A Cooperativa de Estudos e Documentação propõe que a Assembleia Nacional não ratifique o Decreto 502/71” [The Cooperative of Studies and Documentation proposes that the National Assembly does not ratify Decree 502/71] and “O regime saído da Constituição de 1933 olhou sempre com desconfiança para o cooperativismo – declarou à «República», o arq.º Nuno Teotónio Pereira” [The regime that came out of the 1933 Constitution always looked with suspicion at the cooperativism - declared to República the architect Nuno Teotónio Pereira” [BNP]. During Marcelism, cultural cooperatives were politically persecuted (including that of which JAR was vice-president, the VIS) and the majority were coerced into closing its doors, in 1972. Nuno Teotónio Pereira, a well-known activist of the Pragma cooperative (in the image), denounced the anti-democratic attitude underlying this arbitrariness in an interview to the newspaper that was the spokesman of the opposition republicans. The case ended up in the Prosecutor General’s Office which, sometime later, proved the victims of this persecution right, a decision that no longer could reverse the damages caused. 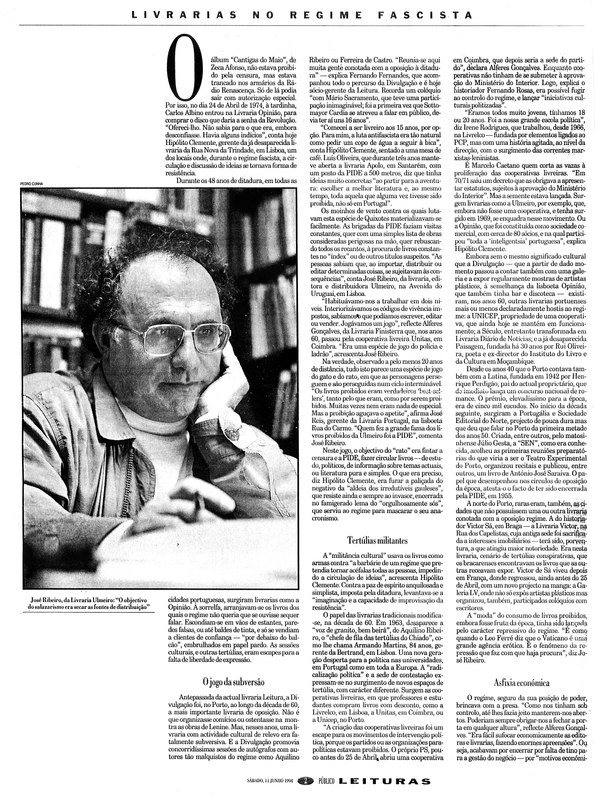 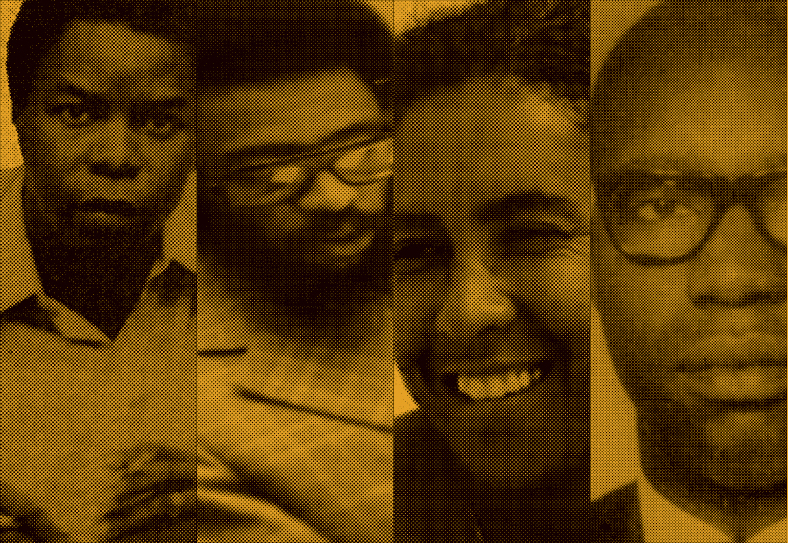 Photomontage with activists from the independence movements Luís Bernardo Honwana (Mozambique), Manuel Faustino (Cape Verde), Helena Lopes da Silva (idem) and Manuel dos Santos (Guinea-Bissau), [DCA JAR and internet]. Several African students who were involved in the independence struggle had an open account at Ulmeiro so that they could access the books that ignited the new times of revolt, like many of those distributed by Ulmeiro. 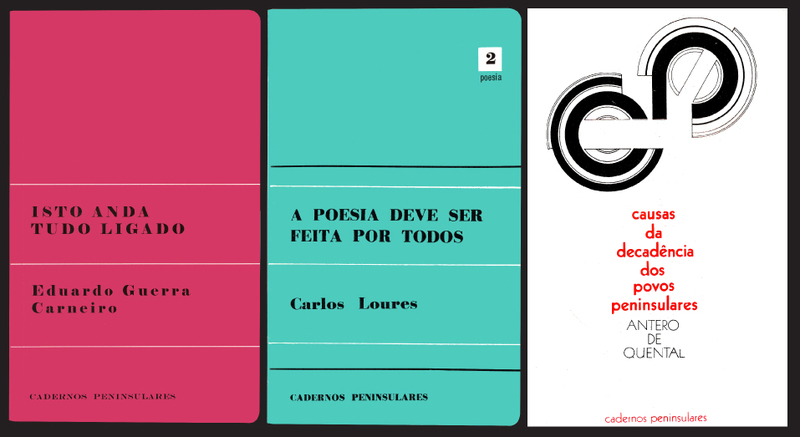 Book covers Isto anda tudo ligado [This is all connected], by Eduardo Guerra Carneiro, A poesia deve ser feita por todos [Poetry should be done by everyone], by Carlos Loures, and Causas da decadência dos povos peninsulares [Causes for the decadence of the Peninsular peoples], by Antero de Quental (Ulmeiro, col. Cadernos Peninsulares, respectively ns. 1-3, 1970), [DCA JAR]. Poetry of the new generation and criticism of past censorships mark Ulmeiro's debut in publishing, with a collection that would become iconic and that as early as 1972 was transferred to the novel Assírio & Alvim. The book A poesia deve ser feita por todos was then seized by the political police, its author was already referenced for having written and published A voz e o sangue [The voice and the blood], at Novo Rumo, and therefore was imprisoned for half a year in 1968.

Cover of the book Histórias do cárcere: contos [Prison stories: tales], by Juan Gómez Casas (Ulmeiro, col. Cadernos Peninsulares, nº 4, 1970), PIDE's apprehension notice of the referred book, 18/10/1970 [DCA JAR] and opening page of Ulmeiro's list “Distribuição do livro [Distribution of the book] «Histórias do cárcere»”, dated 12/10/1970, 4 typed and numbered pages signed by the “manager” JAR and with a manuscript note from DGS [political police] services [DGLAB/ PIDE/DGS Archive - “Document provided by ANTT. Quota: Pide, SC, CI(1)2224, NT 1242, folder two”]. The first printing of this translation of the testimony of a resistance Spanish anarchist was then almost all seized by the political police (c. 2,000 copies), although the record only refers to 2 copies and 10 days later the censorship authorized its circulation. The subsequent return, when it was done, was only of a few copies and forced the victim to go to the political police headquarters: the dictatorship simulated a face of legality while in the shadows it persisted with illegal, cynical and harmful practices. In this case, the publisher also had to provide a list of the sales outlets to which it had distributed this work, on whose initial page there is a sort of publisher's logo, in the form of a visual stamp, at the top left. 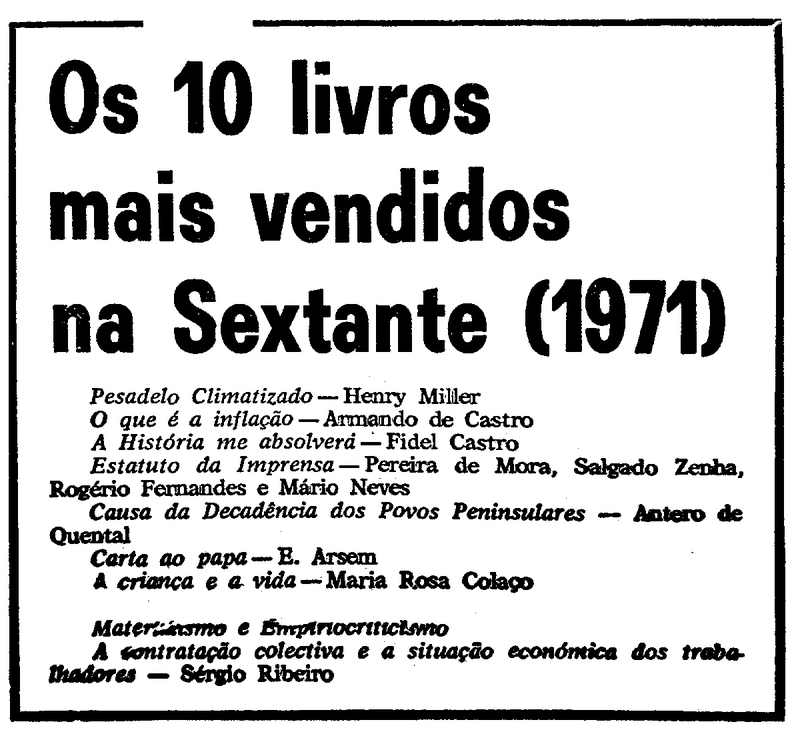 Short article “Os 10 livros mais vendidos na Sextante (1971)” [The 10 best-selling books in Sextante], República, 20/1/1972, page 9 [BNP]. Until they were extinct, cultural cooperatives formed a network of production, circulation and dissemination of books and ideas of political and cultural resistance. The Azorean publisher Sextante was a partner of the publisher José Antunes Ribeiro in the civic action and circulation of his works, first at Itaú (with A criança e a vida [The Child and the Life], by Maria Rosa Colaço) and then at Ulmeiro (with the re-edition of the famous book by Antero de Quental), as attested by this top ten. 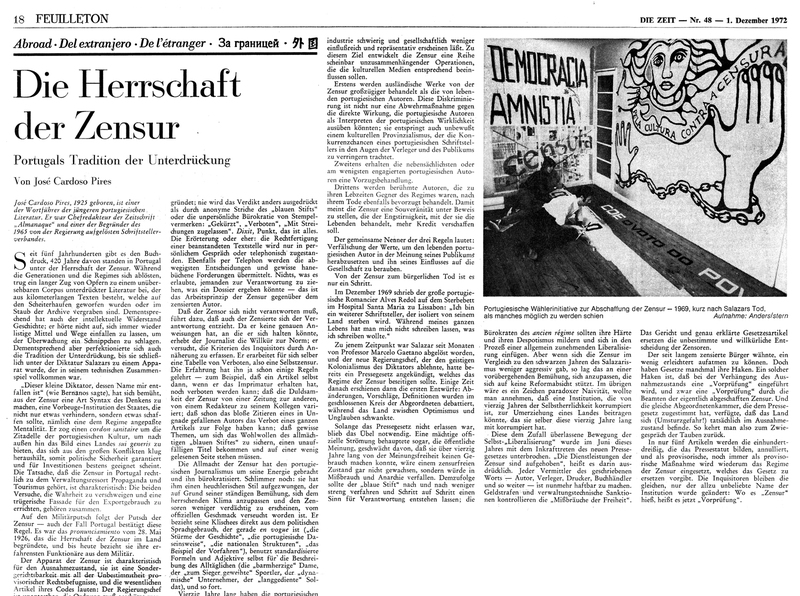 Article “Die Herrschaft der Zensur. Portugais Tradition der Unterdrückung” [The censorship rule. Portuguese tradition of oppression], Die Zeit (Hamburg, no. 48, 1/12/1972), [Digital Library / Digital Dossier JCP]. This article from a leading German newspaper reproduces a photograph showing a mural entitled «Pela cultura contra a censura» [For culture[,] against the censorship] and which illustrated an excerpt from the “Técnica do golpe de censura” [Technique of the coup of censorship] text by José Cardoso Pires, in an attached article [“caixa”]. By this means, an initiative for the abolition of censorship was disseminated abroad by the opposition front Comissão Democrática Eleitoral (CDE) [Democratic Electoral Commission], to which the founders of Ulmeiro and other independent publishers of the time were connected. 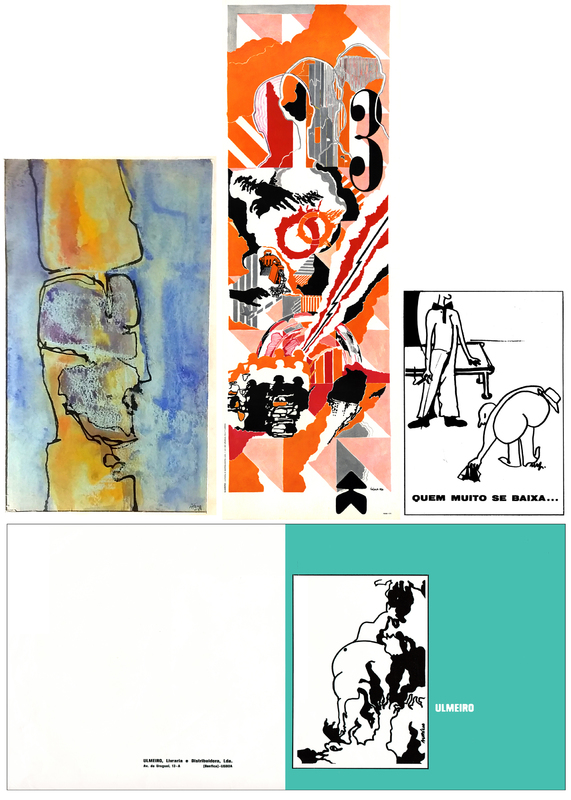 Polychromatic painting without title, by António Ferra, c.1970 [DCA António Ferra]; engraving-serigraphy “Composition with juxtaposition of elements and number 3”, by Rogério Petinga, Lisbon, Ulmeiro, printed 1970, 70x24 cm [BNP]; drawing “Quem muito se baixa”, by Aurélia Rosa da Silva, Lisbon, Ulmeiro, 1971, b & w, 17x12 cm [BNP]; and protective cover of books, by Aurélia Rosa da Silva, Lisbon, Ulmeiro, 197- [DCA JAR]. Combining publishing and art, the publisher opened a gallery of the same name in 1970 to promote the art from the new generations, which it then reproduced in limited series. If the portrait of Ferra was not meant to confront, the same could not be said of the works by Rogério Petinga, a strong attack (even if well 'disguised') against the disastrous effects of war (implicit allusion to the colonial War, an omnipresent theme for the new generations) and by Aurélia Rosa da Silva, her drawing implying political criticism. To this artist, who exhibited at the Ulmeiro gallery, was commissioned by bookshop-Ulmeiro a series of protective covers, in green or orange papers, which served to wrap the books sold and protect them from whistle-blowing eyes.

See next section:  2. The word is a weapon. Literary complicity and internationalist solidarity >>