2. The word is a weapon. Literary complicity and internationalist solidarity

With a bookshop located in the densely populated neighbourhood of Benfica, on the busy Avenida do Uruguai, Ulmeiro began by importing and selling many works by Spanish counterparts, some known for their resistance to Francoism (Aguillar, Ayuso, EDICUSA, Librería Miguel Ibañez, Ruedo Ibérico, Seix Barral, Siglo XXI and Xyz). On the other hand, it left works by Pessoa to Alianza Editorial, encouraging their discovery and translation by familiar people. In order to import political essay it also contacted the publishers Maspero (Paris) and Feltrinelli (Rome) and the Brazilians Martins Fontes and Civilização Brasileira (these ones via intermediaries).
Taking advantage of the great convergence existing in the Iberian protestant youths of the 1960s and 1970s, the dissemination of works and authors also involved participating in other people' activities (such as a celebration-meeting of the Christian democrats of Cuadernos para el Diálogo, in Madrid, 197-) and organising tertulias (gatherings) at the bookshop. In these meetings participated lovers of Spanish language literature such as José Bento and Fernando Assis Pacheco. There were declaimed, debated and sold works by Spanish novelists and the Latin American literary boom (José María Castellet, Gabriel García Márquez, Julio Cortázar, Mario Vargas Llosa, etc.), in Castilian and at affordable prices (because they were pocket books), but also the translations integrated in the Cadernos Peninsulares [Peninsular Notebooks] and other Portuguese collections. Of these evenings of poetry and music it is worth mentioning one that had the participation of the Spanish poet Manuel María, who had been at Ulmeiro in January 1972, to present and recite in Galician his poetry, that he had then anthologized, revealing the local social reality. His poems were present in the voice of Benedicto García Villar, guru of Voces Ceibes (a group linked to the protest song, cancion de protesta, and which used Galician as a weapon) and friend of José Afonso, taking part that same year in a tour with him and in his album «Eu vou ser como a toupeira» [«I will be like the mole»] (ed. by Orfeu).
Ulmeiro thus made a special contribution to the dissemination of works associated with progressive thinking and the most innovative creation, originating mainly from Spain, France and Brazil, and helped to reveal authors such as those from the Latin American literary boom and revolutionary theorists (Marxists and Third Worldists) of various currents.

Video documenting section 2 of the physical exhibition, open to the public in 2019. 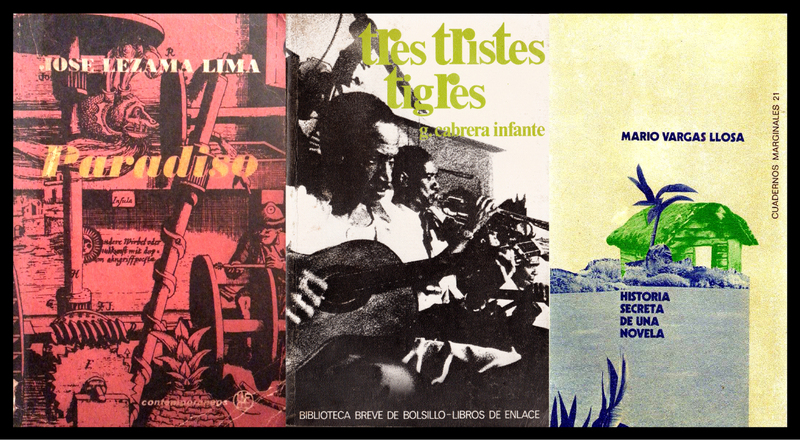 Photomontage with covers of 3 books imported from Ibero-America and Spain and distributed by Ulmeiro [DCA JAR]:
►Paradiso, by José Lezama Lima (Havana, Unión Ediciones, 1966); ►Tres tristes tigres, by Guillermo Cabrera Infante (2nd ed., Barcelona, Seix Barral, 1971, o.v. 1965); ►Historia secreta de una novela, by Mario Vargas Llosa (Barcelona, Tusquets, 1971).
Paradiso [Paradise], by Cuban Lezama Lima, was the exponent of Latin American literature for JAR and one of his failed publishing projects. It was eventually published in the Provisórios & definitivos [Provisional & Definitive] collection, in 1991, in a joint edition of Vega and Afrontamento.
Tres tristes tigres [Three sad tigers], by the also Cuban Cabrera Infante was a work of criticism to Castro’s ideology which has nevertheless circulated in the cultural circles of the militant left. But the 1st edition in Portugal only came out in 1997, by Publicações D. Quixote, in a full text incorporating the cuts of censorship.
Historia secreta de una novela [The secret story of a novel], by Vargas Llosa, was originally published by Tusquets in a collection with the symptomatic title of Cuadernos Marginales [Marginal Notebooks].
In 1973, José Ribeiro and friends inaugurated the Mínima [Minimal] Collection of the novel Assírio & Alvim with a translation of this essay, which contains personal reflections regarding the construction of the 2nd novel by Vargas Llosa, A casa verde ([The Green House], original version of 1965), on oppression in Latin America. 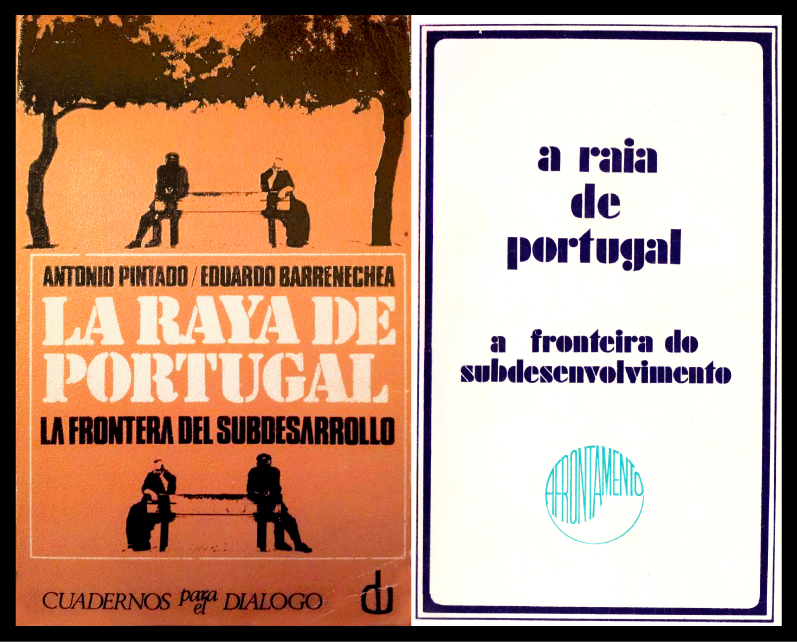 Covers of the books La raya de Portugal. La frontera del subdesarrollo, by Antonio Pintado and Eduardo Barrenechea (Madrid, Edicusa / Cuadernos para el Diálogo, 1972), [DCA JAR], and A raia de Portugal, by António Pintado and Eduardo Barrenechea (Porto, Afrontamento, 1974; translation by Cidália Queirós), [BNP].
The Madrid-based Cuadernos para el Diálogo has published the original edition of this book revealing the harsh living conditions and effects of rural exodus, illegal emigration and underdevelopment in the border territory of Portugal (also covering the Spanish side). The novel publisher Afrontamento from Porto translated it into Portuguese as soon as possible and Ulmeiro distributed both editions. The censorship of Marcelism allowed it to pass as it spoke of "truths": the censor would be more sensitive to the misfortunes of the northern peasantry, after all, a part if not of the social base of support of the dictatorship, at least of its political-cultural imagery. 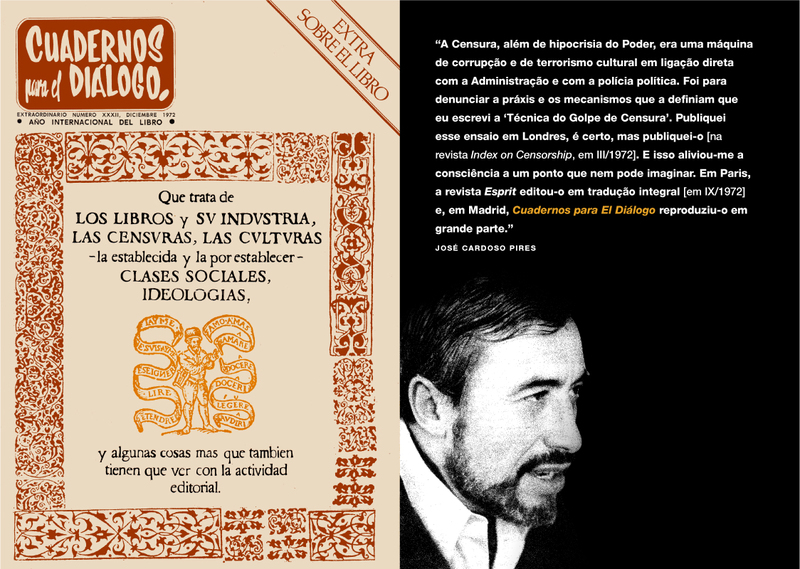 Cover of the magazine Cuadernos para el Diálogo, no. XXXII extraordinary, 12/1972, and photomontage with a José Cardoso Pires' profile photo and with an excerpt from the author referring to the circulation of his text on censorship in several European publications [DCA PPM].
This bold issue of the Spanish magazine, whose authors had met the mentor of Ulmeiro, included an article by Alfonso Comín with quotes from the “Técnica do golpe de censura” [Technique of the coup of censorship], essay by José Cardoso Pires. In that same month a partial translation of the latter was published in the German newspaper Die Zeit. In Portugal it was only published in 1977, in the 1st edition of E agora, José? [And now, José?], of Moraes Editora. The importance of its disclosure, which acted as a tool of denunciation and catharsis, was confessed by him in an interview to Artur Portela published in Cardoso Pires por Cardoso Pires, Lisbon, Publicações Dom Quixote, 1991, p. 124. 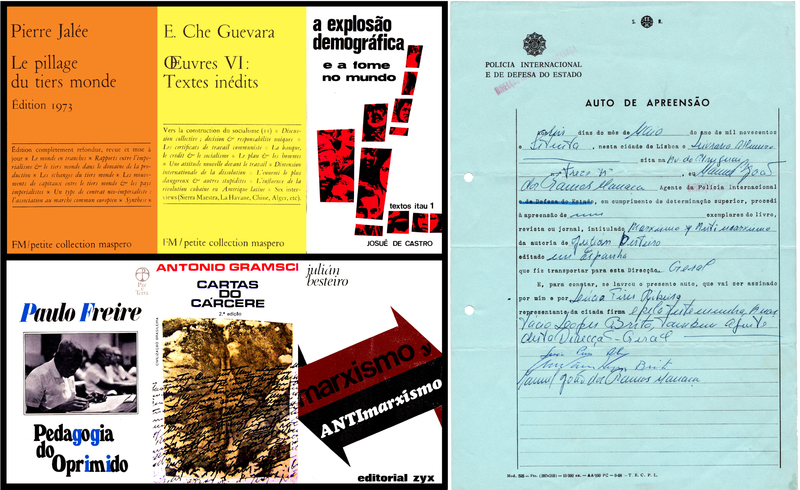 Apprehension notice by PIDE of the book Marxismo y anti-marxismo, by Julián Besteiro (Murcia, ZYX, 1967), from 6/5/1970, and photomontage with covers of 6 books imported from Ibero-America and France and distributed by Ulmeiro [DCA JAR]:
►Le pillage du Tiers monde, de Pierre Jalée (Paris, François Maspero, 1965); ►Œuvres VI: textes inédits, de Che Guevara (Paris, François Maspero, 1972); ►A explosão demográfica e a fome no mundo, de Josué de Castro (Lisbon, ltaú, 1968); ►Pedagogia do oprimido, de Paulo Freire (Porto, Afrontamento, 1972); ►Cartas do cárcere, de Antonio Gramsci (Rio de Janeiro, Civilização Brasileira, 197-); ►Marxismo y anti-marxismo, de Julián Besteiro (Murcia, ZYX, 1967, o.v.1935).
Among the remarkable works in the internationalist dialogue that then connected generations of protesters around the world, it is important to highlight those of inspirational revolutionary leaders such as Gramsci and Che, and those of contemporary thinkers such as the Brazilians Josué de Castro and Paulo Freire. By the latter it should be mentioned the book Pedagogia do oprimido [Pedagogy of the oppressed], edited in Portugal by Porto’s publisher João Barrote in 1972 for Afrontamento and soon seized by PIDE (the political police), the year in which the 1st Brazilian edition was also launched. Even imported books were prohibited by the marcelist dictatorship, as can be seen by the seizure of the book Marxism y anti-marxismo by the political police. The Third-world solidarity was clearly evident in the questioning of Western colonialism and neo-colonialism, propagated in books such as those by Pierre Jalée, printed by engaged publishers like Maspero. 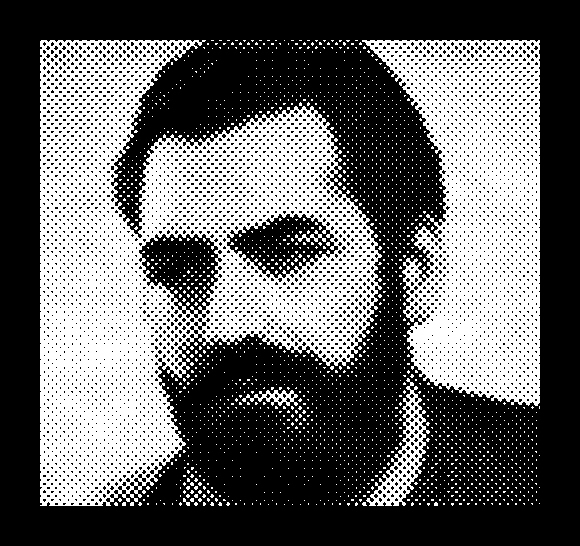 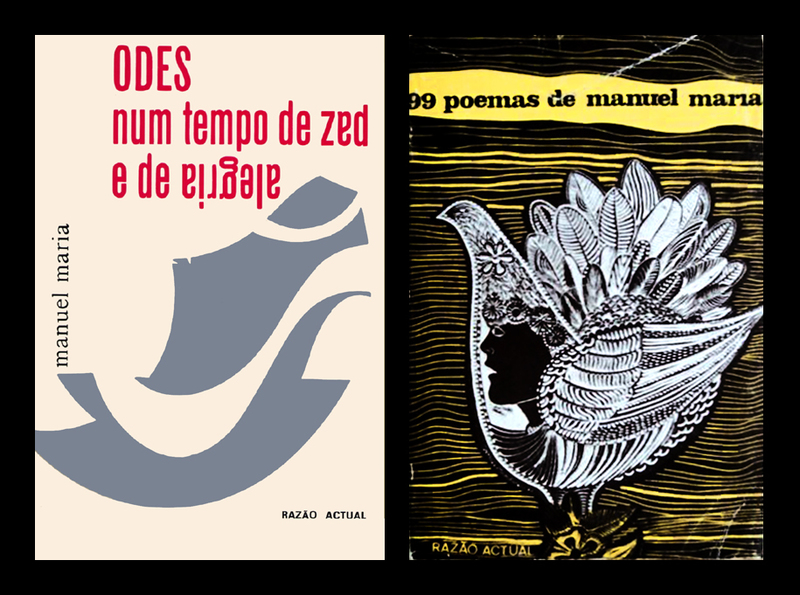 Covers of the books Noventa e nove poemas de Manuel María (1950-1970) [Ninety-nine poems by Manuel María (1950-1970)] and Odes num tempo de paz e de alegria [Odes in a time of peace and joy], both by Manuel María (Porto, Editorial Razão Actual, col. Poesia, respectively ns. 3 and 4, 1972), [AELG Archive; Casa-Museu Manuel María].
The Galician poet Manuel María (1929-2004), in the image, did a 20-day tour around Portugal in 1972, with Pintor Pousa and Arsénio Mota (this one, publisher of Porto's Razão Actual), having lectured at the Sociedade da Língua Portuguesa [Portuguese Language Society] and performed a recital at Ulmeiro, on 11 or 12 January, where he signed his anthology of 99 poems, which contains the poem “Portugal” and poetry of social propensity. In the previous issue of this collection, another anthology was published to “make the very rich Galician culture of today known”, as stated on the back cover of Celso Emilio’s Autoescolha poética [Poetic Self-Choice].

See next section:  3. The final fight against the dictatorship  >>