5. Anti and post-colonialism and new forms of intervention

The colonial legacy will continue to be questioned by Ulmeiro. When it revealed in 1976 the Massacres na Guerra colonial [Colonial War Massacres], it documented known cases of atrocities committed by the Portuguese army in the Colonial War, one of them first-hand reported by the English priest Adrian Hasting as the “massacre of Wiriamu”, resuming other related production*. Due to this edition, the author and publisher were prosecuted by the military justice, a case never seen before. The process, which went on until 1983, ended in amnesty, leaving the publisher nonconformist, for finding it worthy of a sentence, of accusation or of acquittal.
Colonialism (and post-colonialism) were also documented by books on themes like the counter-insurgency and the role of the independence movement MPLA [People's Movement for the Liberation of Angola] in Angola, as well as by a generous offer of fictional narrative and poetry by Luso-African authors (e.g. Alda Espírito Santo, António Cardoso, David Mestre, Abílio Teixeira Mendes and Ascênsio de Freitas).
Despite the setbacks, Ulmeiro started the 1980s strong, seeking to diversify approaches and support, innovating in illustration and the dissemination of 'avant-garde' experiences and re-investing in new authors.
It opened the decade with a songbook by José Afonso, a familiar protest singer, and proceeded with the publication of several works on the protest song.
It launched the Três continentes [Three Continents] magazine (1980-81), which promoted internationalist cooperation and disseminated news on developing countries, giving priority to the new "Lusophone" space and putting on the public agenda the silenced case of self-determination of the people of Timor-Leste (produced 20,000 copies up to No 12).
In resuming the periodical edition, the Sobreviver [To Survive] (1980-86) followed, which embraced new social themes (ecology, feminism, naturism, antimilitarism, etc.), and the latest happenings of experimental poetry. This magazine signalled a greater expression to graphics and quality illustration (standing out António Pimentel, João Carlos Albernaz and Lídia Martinez), as well as to caricature (e.g., with Vasco).
They were completed by a promotional bulletin, the Ulmeiro Jornal [Journal] (1984-85), which contained thematic texts, author profiles, etc.
In 1985, with “nearly a million books” published, Ulmeiro continued to “swim against the tide” although warning to the “economic suffocation of our bookshops and publishers, new taxes [the VAT]” (Ulmeiro jornal, No. 4, III/1985).
_____________________________________
*V.g., Terror em Tete: relato documental das atrocidades dos portugueses no distrito de Tete, Moçambique (1971-1972) [Terror in Tete: Documental account of the Portuguese atrocities in the district of Tete, Mozambique (1971-1972)], Porto, A Regra do Jogo, 1973, transl. António Sousa Ribeiro; and Wiriamu, Porto, Afrontamento, 1974.

Video documenting section 5 of the physical exhibition, open to the public in 2019. Cover of the book Massacres na Guerra colonial: Tete, um exemplo [Massacres in the Colonial War: Tete, an Example], of José Amaro Dionísio (Ulmeiro, 1976), [DCA JAR].
This book documented cases of atrocities committed by the Portuguese army in the Colonial War, one of which revealed by the English priest Adrian Hasting, as the “Wiriamu massacre”, and was in connection to other related production: v.g., Terror em Tete: relato documental das atrocidades dos portugueses no distrito de Tete, Moçambique (1971-1972) [Terror in Tete: a documentary account of the atrocities of the Portuguese in the district of Tete, Mozambique (1971-1972)], Porto, A Regra do Jogo, 1973, translated by António Sousa Ribeiro; and Wiriamu, Porto, Afrontamento, 1974. However, its author and publisher were the only ones to be prosecuted by military justice of the post 25th April, 1974 on this then still taboo subject. 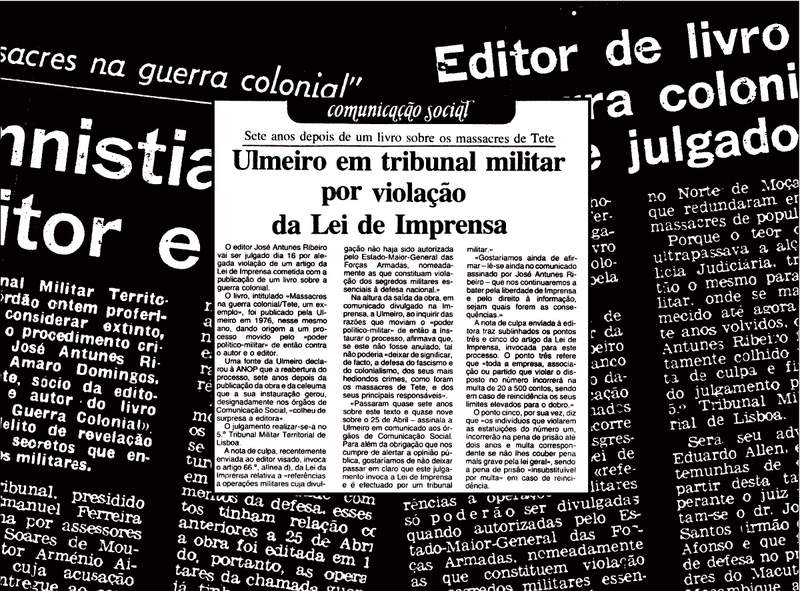 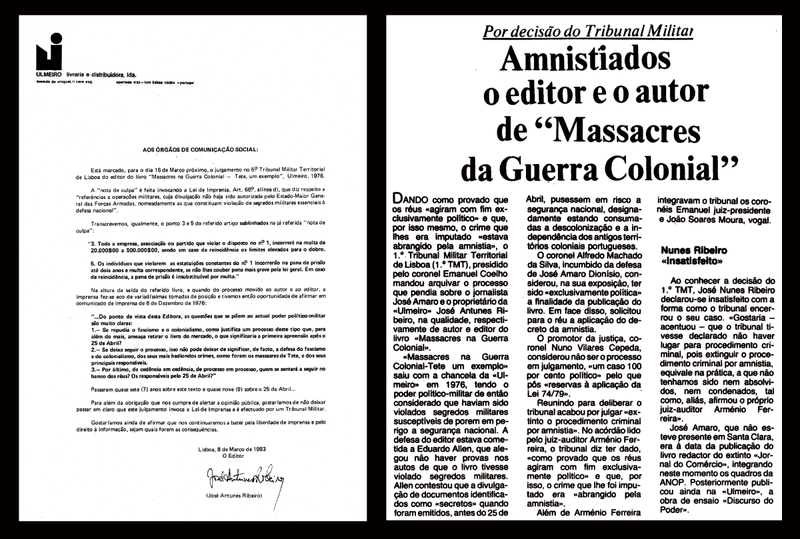 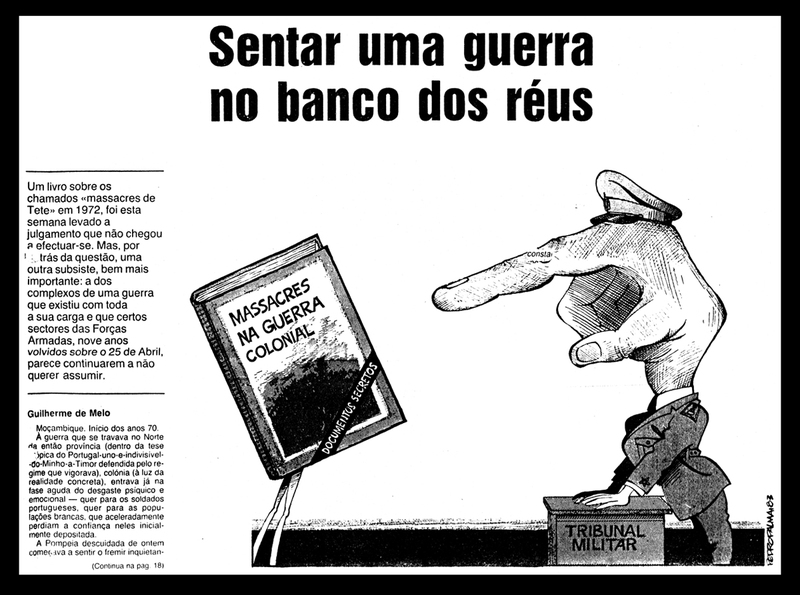 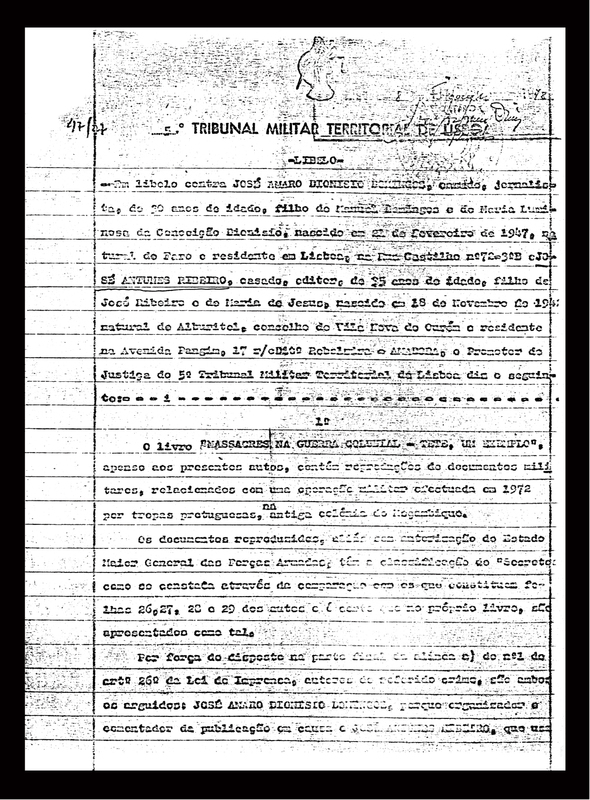 Title page of the judicial process regarding the book Massacres na Guerra colonial: Tete, um exemplo [Massacres in the Colonial War: Tete, an exemple], by José Amaro Dionísio (Ulmeiro, 1976), [Esp. JAR].
The judicial process filed against the publication of Massacres na Guerra colonial for allegedly undermining “national security” was the only one under democracy concerning books documenting the Colonial War. It extended over eight years (1976-1983) and revealed not only the extreme difficulty to publicly debate this subject (only tolerable through fiction) but also the dark side of the legacy of the armed forces in Portuguese politics. The decision to grant amnesty to those responsible for the book Massacres in the Colonial War, authored by journalist José Amaro Dionísio, left publisher José Ribeiro nonconformist, as there was no court verdict of acquittal or conviction. This case had extensive press coverage, from beginning to end, by journals like Diário de Lisboa, Diário de Notícias, A Capital and Página Um. A lição de coisas [The lesson of things], by António Cardoso (1933-2006), is a remarkable book by one of the key independentist poets in Angola, and was analysed in a homonymous PhD thesis by Tércio de Abreu Paparoto (USP, 2010).

Os famintos [The famished], by Luís Romano (1922-2010), banned book in the 1940s, which was published in his Brazilian exile in 1962 (via Editôra Leitura) and relaunched by Ulmeiro in 1984, reports the situation of misery in which the Cape Verdean population lived under the colonial rule, as can be read in the editorial publicity sent by the publisher to literary critics and agents of the book sector, like Natália Correia, then linked to publisher Arcádia. Official letter from Ulmeiro of 1984 for editorial publicity of the book Os famintos (The famished), by Luís Romano [AHBPPD/ Natália Correia Archive].

Cover of the book Henda Xala, of Abílio Teixeira Mendes (Ulmeiro, 1984), [DCA JAR] and newspaper article “O romance-testemunho de um médico sobre a Guerra colonial em Angola”, by C. B., Diário Popular, 17/4/1984 [DCA JAR].
Henda Xala is a novel about its author's passage through the Colonial War in Angola, after his activism in the student fight of 1962 in Portugal.

Front and back cover and p. 19 (poem “Portugal colonial”) of the book Nas barbas do bando, of David Mestre (Ulmeiro, coll. Biblioteca literária Ulmeiro, no. 4, 1985), [DCA JAR].
David Mestre was an Angolan poet of modernist affiliation, also an independence activist (military deserter in 1971, arrested until 1974) and from the Mota Veiga family, whose homonymous literary prize would boost Luandino Vieira and his Luuanda. Mestre's book Nas barbas do bando [In the beards of the gang], which includes the denunciation poem “Portugal colonial” [“Colonial Portugal”], has a front cover by António Ole, a preface by Ana Mafalda Leite and on the back cover it reproduces a handwritten poem by José Craveirinha dedicated to the author. This was a joint edition of Ulmeiro and União dos Escritores Angolanos [Angolan Writers' Union]. Prostitutas de guerra - mercenários de hoje [Prostitutes of war - mercenaries of today], is a book which addresses the role of the mercenaries in the war that the apartheid South African regime waged against the independent Angola, with the support of Zaire, and traces the more recent history of this war machine. One of the first studies on postcolonial counter-insurrection, recommended in a preface by influential African history scholar Basil Davidson. Angola: documentos do MPLA [Angola: documents of the MPLA] was organized by José Fortunato (i.e., JAR) for the new collection 3.º Mundo e revolução (Third World and revolution) and included reference documents about the role of this Angolan independence movement in the anti-colonial fight. História da China: 1840-1949 [History of China: 1840-1949] is one of several books dedicated by the publisher to the themes of emancipation of the peoples of Asia who had been under colonial yoke, in an anti-imperialist spirit. 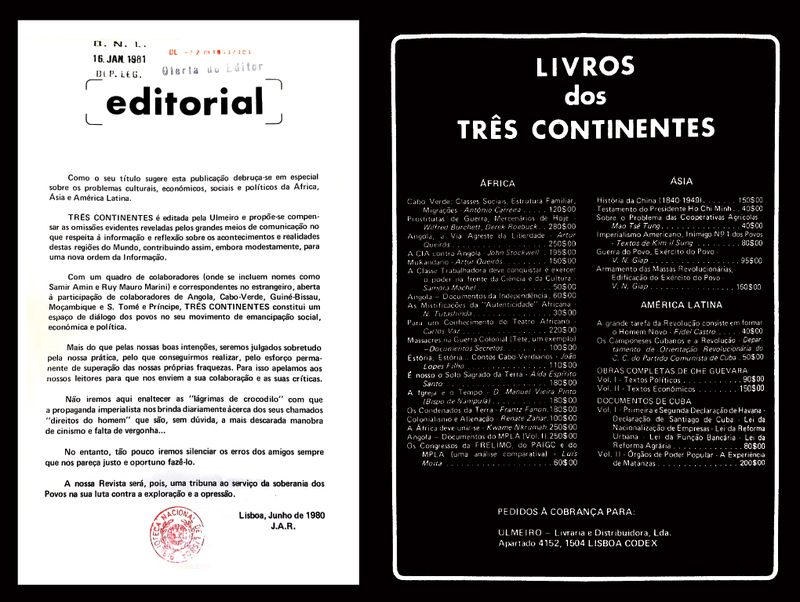 Newspaper editorial “Editorial”, by JAR, Três continentes, no. 1, 6/1980, p. 1, and adverising texto “Livros dos três continentes”, s.a., Três continentes, no. 1, 6/1980, p. 2 [DCA JAR].
The editorial above introduces the journal which Ulmeiro dedicated to the cooperation with the former Portuguese colonies and to the valorisation of developing countries, proposing a non-parochial newscast with a particular internationalist (Lusophone) engagement, both of which were fading already. It had strong competition: the Cadernos do Terceiro Mundo [Notebooks of the Third World], published in Brazil since 1974, and then in Portugal, with editions in Spanish and English and worldwide distribution. At the height of the Non-Aligned Movement, which at the time challenged the dualism of the USA and USSR superpowers, Ulmeiro publicised an internationalist library made up of books it had published in the meantime. It was devoted to the study of the countries that could integrate this new political-ideological space. 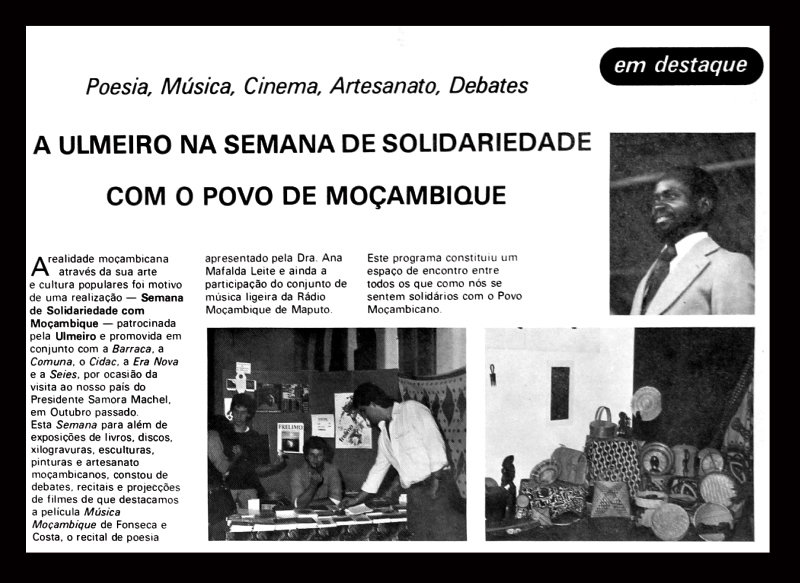 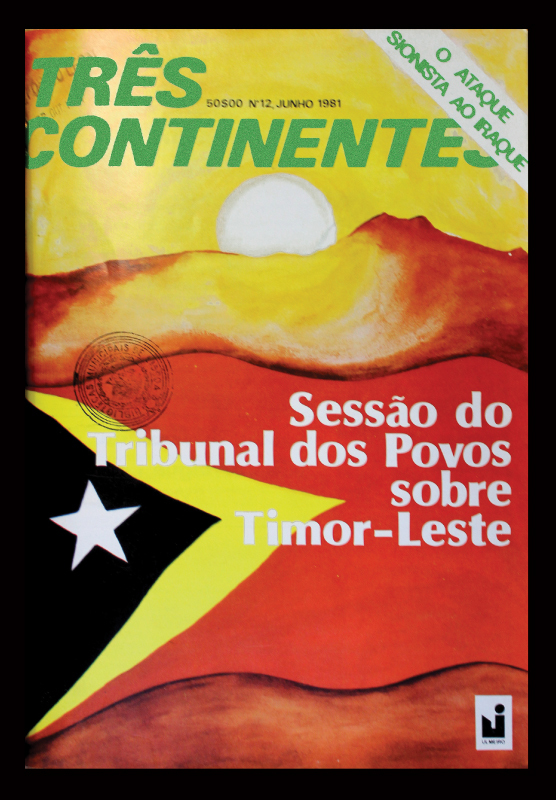 Cover magazine with the title “Sessão do Tribunal dos Povos sobre Timor-Leste”, by João Carlos Albernaz, Três continentes, no. 12, 6/1981 [DCA JAR].
This issue of Ulmeiro's internationalist journal contains a unique dossier on the self-determination of the Maubere people at a time when the Indonesian occupation and oppression in Timor-Leste had fallen into international oblivion, including in Portugal. 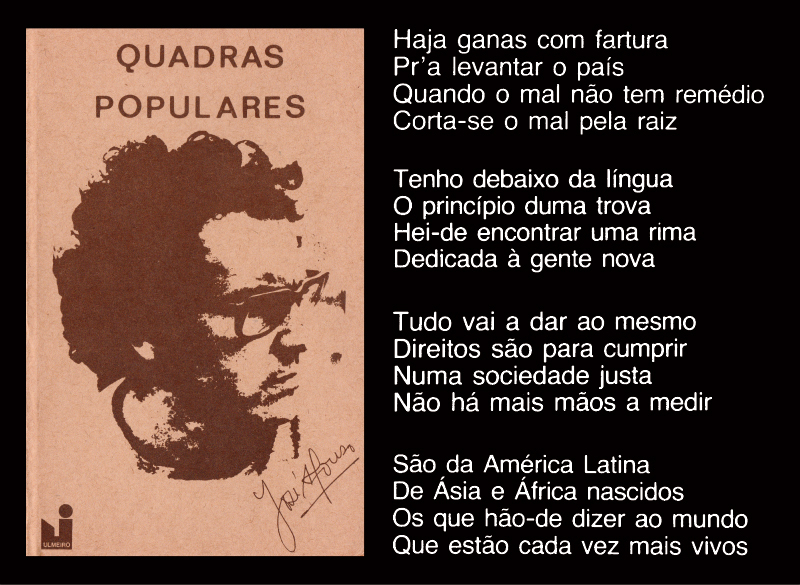 The rhymes "Haja ganas com fartura” [“Let there be willingness with plenty”], “Tenho debaixo da língua” [“I've got it under my tongue”], “A velhice não se enjeita” [“Old age is not rejected”], “Tudo vai dar ao mesmo” [“it all ends up the same”] and “São da América Latina” [“They are from Latin America”] indicate some of the ideas of José Afonso with which the publisher of Ulmeiro most identified in his activity: patriotic voluntarism (or the imperative of personal initiative to help overcome social evil), attention to the cultural connection with the new generations, social idealism and internationalist solidarity. 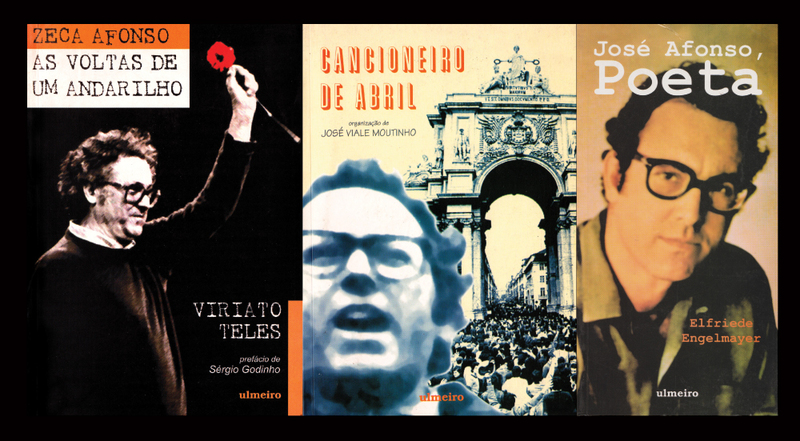 Quadras populares [Popular rhymes] (1980) was a tribute to the most famous Portuguese singer-songwriter, containing some poems of current political criticism as well as rhymes from his album Com as minhas tamanquinhas [With my little clogs] and the lyrics of the song “Índios da Meia Praia” [“Indians of the Meia Praia”]. This book has had 7 editions, the last one being from 1999. Along these lines, Ulmeiro also published several books on Portuguese intervention song, including reference works by Viriato Teles (prefaced by Sérgio Godinho) and Elfriede Engelmayer. On the occasion of the 25th anniversary of the «carnation revolution» it also published an anthology by Viale Moutinho that integrates the lyrics of singer-songwriters of José Afonso's generation in a new type of songbook. 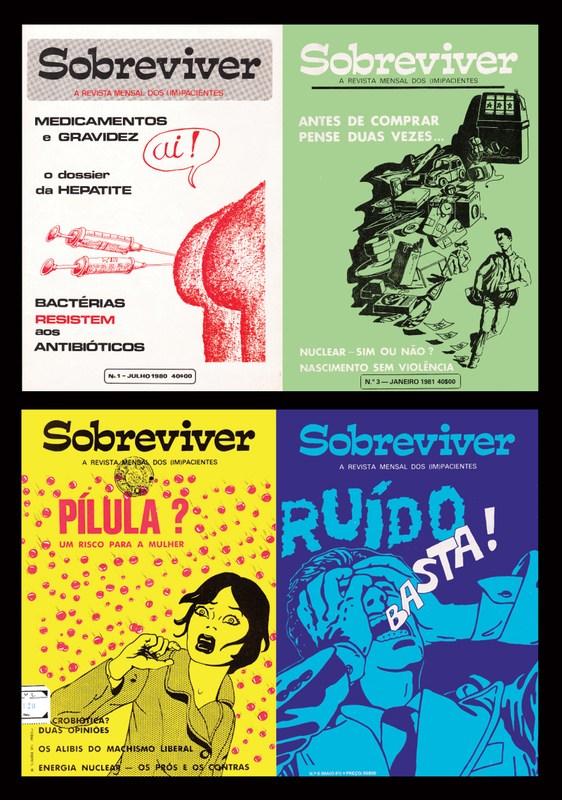 Photomontage of the covers of ns. 1, 4, 5 and 6 of the magazine Sobreviver. A Revista Mensal dos (Im)pacientes, 1st series, 1980-81 [HM/CML].
In the 1980s Ulmeiro invested heavily in cultural ‘agitation’, involving itself with new cultural and social currents, of which the eye-catching covers of its magazine Sobreviver [To Survive] are a reflection. Cover and page 18 of issue no. 4 of the magazine Sobreviver (To Survive), 1st series, 3/1981, the latter reproducing the first of two comics boards by Carlos Dias [Esp. JAR].

Among the new themes covered by Ulmeiro magazine stand out environmentalism (exemplified in an anti-nuclear comic book by Carlos Dias and in an article by activist António Elói), gender equality (in “Hoje é a tua vez” [“Today it´s your turn”], s.a.), and feminism, in a text by Luísa Costa Gomes. The fight against nuclear energy led Ulmeiro to publish a manifesto on energy policy, illustrated by João Abel Manta. That manifesto, publicised on 6/1977, subscribed by 110 scientists and promoted by activists such as Afonso Cautela, Delgado Domingos and José Carlos Marques, was connected to the civic movement against the installation of a nuclear power plant in Ferrel (near Peniche), in 1976, and intended to block the introduction of this option in the country, which it eventually achieved (apud testimonial by José Carlos Marques to the journal Mapa, 18/1/2018, https://www.jornalmapa.pt/2018/01/18/viver-e-preciso/).